BREVARD COUNTY • MELBOURNE, FLORIDA – The Darton State women’s soccer team knew it had faced two challenges on Tuesday: the rust of having been off for two weeks and a Schoolcraft College team that would be desperate after losing its first game in the NJCAA Division I national women’s soccer championship.

Jenna Wade and Maggie VanHusan each scored a goal and goalkeeper Krista Moisio and the defense were solid as the fifth-seeded Cavaliers defeated Schoolcraft College 2-0 at the Eastern Florida State College’s Titan Soccer Complex on the Melbourne Campus.

The Cavaliers, who have been to the national championship game three times – the last in 2011 – don’t have to worry about being battle tested anymore.

“We’d been off for two weeks,” Darton State coach Ken Veilands said “We knew that was going to be a challenge for us and our touches were going to be sloppy. We were just going to have to be resilient.

“We had a game plan that we needed to play two games back to back. We followed that and it worked for us.”

Using frequent substitutions to keep players fresh, not only Tuesday but Wednesday as well, the Cavaliers got a solid team effort all around. 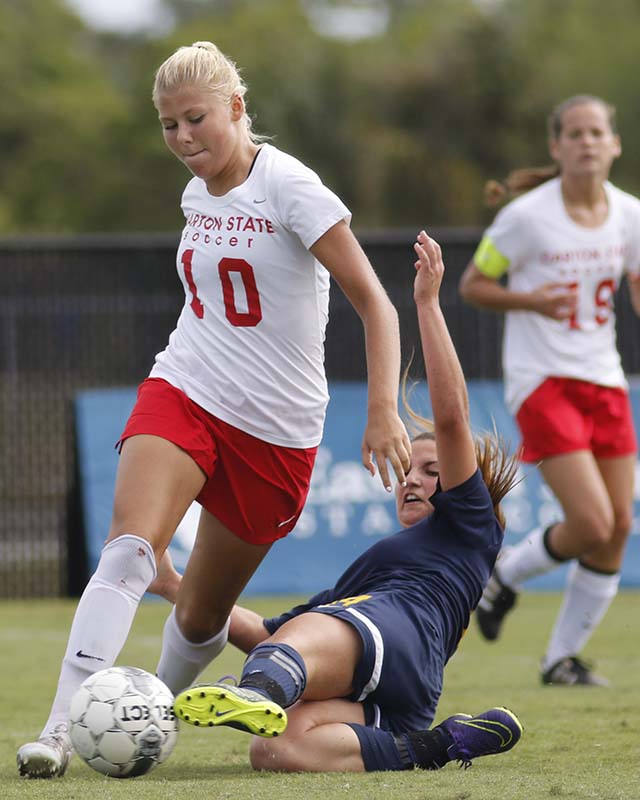 Wade’s goal, which came in the 11th minute, saw her capitalize when a pair of Schoolcraft defenders failed to aggressively try to clear the ball from just outside the goal. Wade took possession, moved to her right and hit the ball high off the goalkeeper’s hands and into the back of the net.

The game nearly turned six minutes later when Schoolcraft was awarded a penalty kick. As Shae Van Gassen lined it up, Darton’s Moisio had a good idea of where the ball was heading.

“I had a feeling she was going to go to my right side, so I was cheating a little bit,” Moisio said. “She went there and she hit the post. I think she got nervous.”

Van Gassen would hit the rebound into the net, but because Moisio didn’t touch the ball on the initial kick, it was waved off.

Despite getting pressure from Schoolcraft, it was Darton that led 1-0 at the half. VanHusan then made it 2-0 on a left-footed kick on an assist from Haley Knowles and the Cavaliers were in full control.

“After the first half, we felt like they were mentally tougher than us because they wanted to win – they had to win,” Moisio said. “But I think we picked it up. We were the better team today.”

Moisio would end up stopping three shots on the day as Darton recorded the fifth straight shutout of the tournament so far.

“We expect a lot from Krista” Veilands said. “She’s on center stage and she knows it. She needs to have a big week. We’re counting on her.”

Though his team’s first trip to the national tournament since 2010 ended after only two games, first-year Schoolcraft coach Dave Carver felt his team learned a lot from Monday’s opening round loss to Butler.

“I feel like the performance we put in today was far better than the one (Monday) because we learned from (Monday),” Carver said. “Again, it’s down to moments. It’s doing things daily to put yourselves in position so when those big moments come up in games, you take care of them.”

The Ocelots coach is hoping this year’s trip to Melbourne will inspire his returning players to work harder to make a return trip next year.
“I think it’s a lot easier sell to the returning players now that they’ve been throughout it,” Carver said. “They understand it.”

Tips for Betting on Soccer

How to Plan and Organize a Sports Tournament

A Closer Look at Inter Miami and David Beckham

Features and Strategies for Soccer Betting

The Race for the Premier League Top Four: Who’s in With a Shout?
Loading...
LATEST NEWS