(NASA) – Humanity has “eyes” that can detect all different types of light through telescopes around the globe and a fleet of observatories in space.

From radio waves to gamma rays, this “multiwavelength” approach to astronomy is crucial to getting a complete understanding of objects in space.

This compilation gives examples of images from different missions and telescopes being combined to better understand the science of the universe.

Each of these images contains data from NASA’s Chandra X-ray Observatory as well as other telescopes. Various types of objects are shown (galaxies, supernova remnants, stars, planetary nebulas), but together they demonstrate the possibilities when data from across the electromagnetic spectrum are assembled. Messier 82, or M82, is a galaxy that is oriented edge-on to Earth. This gives astronomers and their telescopes an interesting view of what happens as this galaxy undergoes bursts of star formation.

X-rays from Chandra (appearing as blue and pink) show gas in outflows about 20,000 light years long that has been heated to temperatures above ten million degrees by repeated supernova explosions. Optical light data from NASA’s Hubble Space Telescope (red and orange) shows the galaxy. Galaxy clusters are the largest objects in the universe held together by gravity.

They contain enormous amounts of superheated gas, with temperatures of tens of millions of degrees, which glows brightly in X-rays and can be observed across millions of light-years between the galaxies. 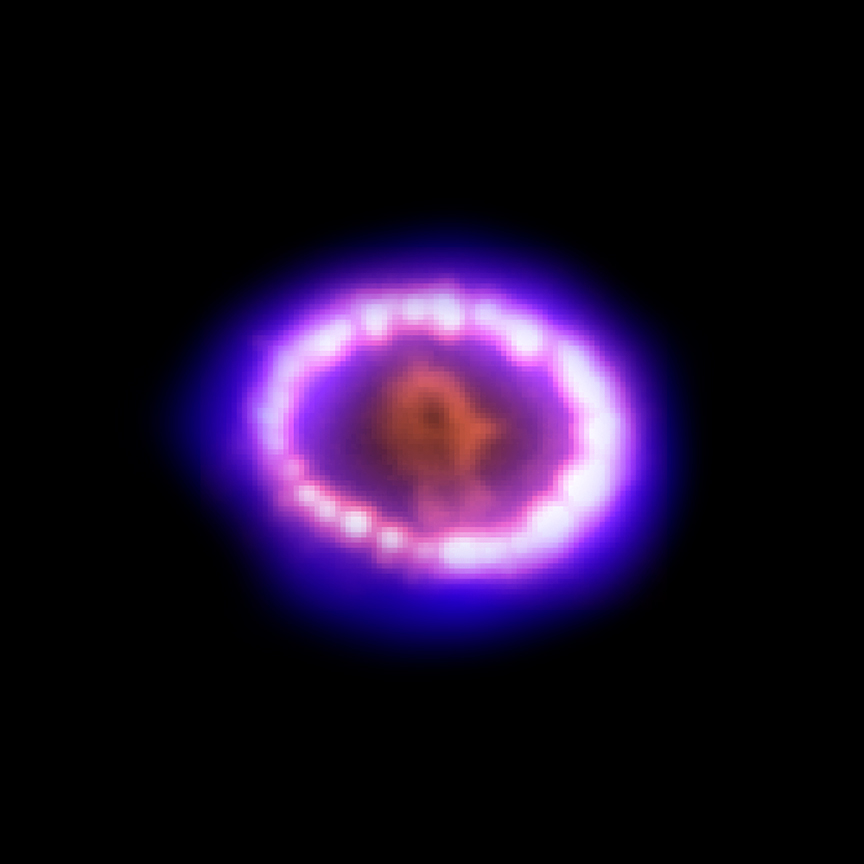 On February 24, 1987, observers in the southern hemisphere saw a new object in a nearby galaxy called the Large Magellanic Cloud.

This was one of the brightest supernova explosions in centuries and soon became known as Supernova 1987A (SN 87A). The Chandra data (blue) show the location of the supernova’s shock wave — similar to the sonic boom from a supersonic plane — interacting with the surrounding material about four light-years from the original explosion point.

Optical data from Hubble (orange and red) also show evidence for this interaction in the ring. What will be the next star in our Milky Way galaxy to explode as a supernova? Astronomers aren’t certain, but one candidate is in Eta Carinae, a volatile system containing two massive stars that closely orbit each other.

The previous eruptions of this star have resulted in a ring of hot, X-ray emitting gas about 2.3 light-years in diameter surrounding these two stars. This galaxy resembles a bull’s eye, which is appropriate because its appearance is partly due to a smaller galaxy that passed through the middle of this object.

The violent collision produced shock waves that swept through the galaxy and triggered large amounts of star formation.

X-rays from Chandra (purple) show disturbed hot gas initially hosted by the Cartwheel galaxy being dragged over more than 150,000 light-years by the collision.

Optical data from Hubble (red, green, and blue) show where this collision may have triggered the star formation. When a star like the Sun runs out of fuel, it expands and its outer layers puff off, and then the core of the star shrinks.

This phase is known as a “planetary nebula,” and astronomers expect our Sun will experience this in about 5 billion years.

The image is about four light years across.

Three of these images — SN 1987A, Eta Carinae, and the Helix Nebula — were developed as part of NASA’s Universe of Learning (UoL), an integrated astrophysics learning and literacy program, and specifically UoL’s ViewSpace project.