Styx – also the faintest of Pluto’s five moons – was discovered using the Hubble Space Telescope in 2012, when New Horizons was more than two-thirds into its voyage to Pluto. The Styx images downlinked on Oct. 5, 2015, were taken by the Long Range Reconnaissance Imager (LORRI) on July 13, approximately 12.5 hours before New Horizons’ closest approach to Pluto.

At that time, the spacecraft was still 391,000 miles (631,000 kilometers) from Styx, making it difficult even for the powerful LORRI camera to see details on such a small moon. “Although it may not look like much, the new composite image of Styx reveals a highly-elongated satellite, roughly 4.5 miles [7 kilometers] across in its longest dimension and 3 miles [5 kilometers] in its shortest dimension,” said New Horizons Project Scientist Hal Weaver, of the Johns Hopkins University Applied Physics Laboratory, Laurel, Maryland.

Styx’s measured brightness, combined with this new size estimate, suggest this tiny moon has a highly reflective, icy surface, similar to what was previously found for two of Pluto’s other small moons, Nix and Hydra.

Using these new images, together with the many measurements of Styx’s brightness taken over several months during New Horizons’ approach to Pluto, the science team hopes to unravel more details about this small moon’s shape and rotational properties. “Ultimately, we hope to learn more about all four of Pluto’s small moons, to understand their similarities and differences, how they formed, and how they evolved,” says New Horizons Principal Investigator Alan Stern, of the Southwest Research Institute, Boulder, Colorado. 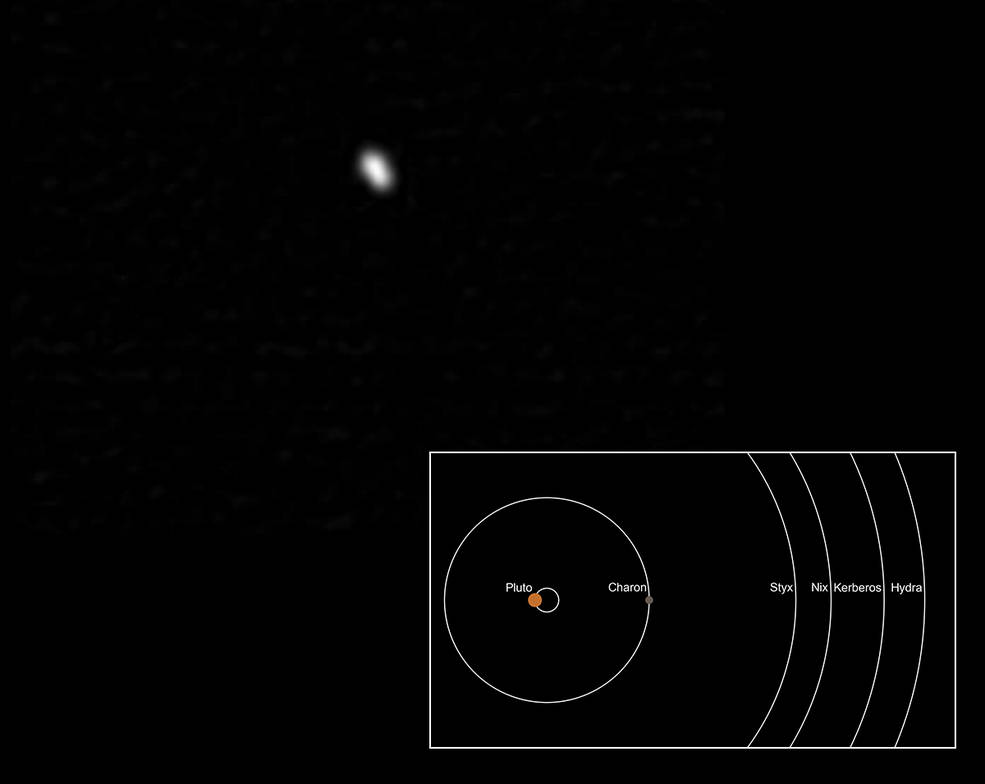 This Long Range Reconnaissance Imager (LORRI) composite image of Pluto’s smallest moon, Styx, was taken July 14, 2015, when the New Horizons spacecraft was 391,000 miles (631,000 kilometers) from the tiny moon. The image reveals a highly-elongated satellite, roughly 4.5 miles [7 kilometers] across in its longest dimension and 3 miles [5 kilometers] in its shortest dimension. For context, the orbits of Pluto’s moons are shown above.